15 tiles were missing on this house in Porto / Portugal, where mostly every facade is covered by tiles.Theywere stolen or fell to the ground. And as these missing tiles were telling about the ephemerality of time and about changes, it came to me that also the short stay of it's inhabitants in the city of Porto was referring to the beginning of a new, of a faster time. So I decided to portrait all the different inhabitants of this particular house throughout one year and adjust them on the house's surface. They had been coming from all over the world to either study or work for just a few months in Porto. First they came to collect impressions but also to leave their own „fingerprints“ onto the city's surface. “ficar” (portuguese for “to stay”) tries to make these prints lasting but also wants to transport an old tradition to a modern time by combining the process of manufactured handcraft with new kinds of motifs and colours, reminding of the style of street-art nowadays.
But the gap itself is not closed. It remains. The new tiles are not imitating the old ones. They do not bring back
the past. They tell a new story. 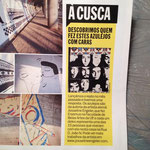 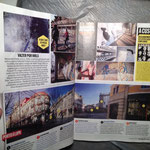